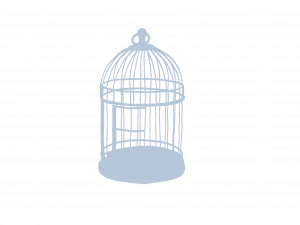 A glass domain. A cage. A cage he is trapped in. This very cage sets the mood for the whole book to follow. Ivan feels trapped, in a literal sense since he is stuck in a glass cage with a painted jungle on the fake wall beside him. But emotionally, he is trapped and separated from his family, his home, and everything he knows best. He is in a constant state of both hopelessness and sadness, along with this he has an undying and desperate urge to go back to his home. The domaine is a literal and emotional object that barricades Ivan from his happiness and prolongs his urge to go home.

The one and only Ivan by Katherine Applegate is a fairly simple seaming and heart touching novel about a gorilla who lives on the top of a mall building.In the novel by Katherine Applegate, we are introduced to the loving, kind and understanding gorilla named Ivan. Living at the Exit 8 Big Top Mall and Video Arcade, he has grown accustomed to humans watching him through the glass walls of his domain. He rarely misses his life in the jungle. In fact, he hardly ever thinks about it at all. Instead, Ivan thinks about TV shows he’s seen and about his friends Stella, an elderly elephant, and Bob, a stray dog. But mostly Ivan thinks about art and how to capture the taste of a mango or the sound of leaves with color and a well-placed line.

Soon after his prolonged solitude in the mall Ivan meets Ruby, a baby elephant taken from her family. Ruby then makes Ivan see their home—and his own art—through new eyes. When Ruby arrives, change comes with her, and it’s up to Ivan to make it a change for the better. This heart touching novel blends humor and poignancy to create Ivan’s unforgettable first-person narration in a story of friendship, art, and hope.

Yet the message that is most prominent in this novel is that although it might seem like Ivan is just an easygoing gorilla, he resembles those who have lost hope in the darkest of times and are isolated from our world.

In this novel it is easy to see that Ivan has become numb to his surroundings. Ivan does not live in a natural habitat, yet is content in captivity. Doesn’t it seem odd that Ivan is comfortable in his environment?  Ivan is known as the kindest and “ideal” type of gorilla yet is trapped in what others want him to be. On page 99 he says, “ I wish humans could understand me the way I understand them.” This is when Ivan is emotionally in the darkest place he has ever been in. In this quote we can see that all he wishes for is someone to understand him. All he really needs is a listener and someone who wants to be there for him. This quote not only shows the extent to which he was isolated in but the extent of which he lacks a companion to talk to openly.

Ivan is stuck in his glass prison, all day, everyday. That must get a little boring; just sitting around all day long. So Ivan decides to take up painting and drawing with the crayons and paint the store owner, Mack, provides him with. However, the paintings that Ivan makes hold a deeper meaning than just a pass time. As he paints, he remembers his old life—the life he had with his mother and father. He remembers the time spent upon his mother’s back, painting pictures on her furry skin with his muddy fingers as they walked along. Back at home, his nickname used to be “Mud” because he was always covered with it. The paintings Ivan creates in his domain at the mall symbolize his time painting with mud on his mother’s back. It represents how much he misses his parents and his memories of life before the mall.

On page 136, Ivan says, “I stopped explaining myself when I realised people only understand from their level of perception.” As mentioned previously, Ivan is not like most gorillas. He lives in a mall, people stare at him, he draws and makes friends with an elephant. Most gorillas experience cool morning breezes and electric green and lush rainforests. Ivan has reached the point of which he has lost all hope.This shows that not only is he all alone, but he is all alone when there are people around him. Even though there might be people around him he feels as isolated as ever. He doesn’t have his mother’s back to ride apon or the mud to cover himself with. Even though he known what it is like to have freedom he loses hope and so accepts his life just the way it is. Ivan paints like most to express his feelings, his paintings show us the reader the sadness pit that he has fallen into. Yet still has no one to talk to.

Throughout the book Applegate develops his character in subtle sarcastic behaviours that would not necessarily be performed by him. Ivan has simply gotten used to his surroundings. In other words he has lost all hope.

When someone loses hope in the darkest of times they start to believe that their surroundings are their natural world even if that means living in a mall. So why is it relevant. This book conveys a meaningful message to all, this is about the idea to never lose hope of the brightest morning even in the darkest hours. As in the book the brightest morning is when Ivan is exposed to radiant and true Stella. 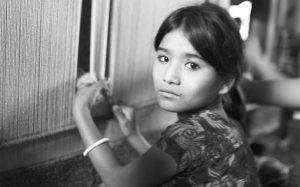 I woke up this morning and rolled over to my parents, woke them up and tried to find my way into the next room. Dark and dingy, the place where the 1 dresser that my siblings and I share lies, once I take out my clothes I change and head to work. My job takes me miles, it is a 50 mins walk. Just to get halfway, I then stop and pick up my 14 year old cousin who happens to be working at the same place as I do. As our feet carry us over the soon to be opening market the fresh smell of newly fried jalebi fills my brain making me think of nothing but. Although my cousin and I can’t afford to spend our hard earned money on jalebi the simple fulfilment of just smelling it gives me satisfaction. As we procrastinate getting to work, we eventually realise that we have no other choice, we can’t go to a friends house or to school, the construction sight is our only option. Now that we have reached and w have to work for the next 14 hours we await the long walk back. When my cousin and I head back home at night there are a few things that we have to do. When we reach home I grab the rusty handle of bucket which all 5 members of our ample family use to take a bath, another journey awaits, the one through the jungle and into the next village, and for what? To have a shower, all 5 of us. Being a child labourer is is having a parched life, while never quenching your thirst for learning, playing,guidance and well-being. Never having the opportunity to know yourself and your potential.

This is how a  day to day life in a child labourer at a construction sight is. Yet this is the unfortunate reality of over 300 million children around the world, not just a few.

Sandy can’t see his hands in the darkness of his shack made from palm bark and zinc on a hillside in the Dominican Republic. But he feels them because of the pain from wounds on his left thumb caused by the knife he uses to trim garlic plants. It is dawn and he has to hurry if he is to get a place in the landowner’s truck. He jumps from the worn mattress that he shares with three other brothers. He doesn’t have breakfast, not because he does not want to but because there isn’t any. Nor does he wear working boots because he has none. When he leaves to fetch water he is never sure if there is going to be any, as he looks down at the bottom of the well he notices that the well is as dry as a bone.

He then proceeds to pick potatoes, extract onions, dig up lettuce, behead beets and cut and gather garlic bulbs. He knows that he can bring home between 80 and 90 pesos on a good day, or $3 to $5, to contribute to the low family income and to buy a pair of shoes. He works in the fields every day from dawn to the middle of the afternoon.His shoulder blades are chiseled from working and lifting heavy weights. His hands are rough, representing his job and his feet are filthy, because he can’t afford shoes.He stretches himself beyond he should and still receives $5 at the most for his work. It’s as though he has been working forever, day and night and yet never received nothing.

My name is Therese and I was an underaged labourer at a Lowell mill in Massachusetts. Like many before me and hopefully fewer after me. I was taken advantage of, not only paid to little but more importantly deprived from attending school. My parents Immigrated to The United States almost 18 years ago, they promised a new life, one completely different to the poor conditions they had lived in while in Ireland. A couple of months after my birth, my dad filed for bankruptcy and soon after committed suicide. When I reached the age of 13, my realised that her monthly wage was not enough. So I offered to help her, not assuming that it would be a temporary requirement lasting a couple of months to get my mom back on her feet. Though the money was helpful, we were still living paycheck to paycheck. Which required me to work at a mill in Massachusetts for a long term job.

Now that I am 36 years old and my mom and I have moved down to Florida. I don’t regret joining the labour force of the mills at such an early age, although I have sleepless nights dreaming and envisioning what my childhood would have been like  without working at such a young age. Becoming a child labourer feels like skipping 2 decades of your life and working all day. Sometimes I wonder how different it would be in another country.